welcome to beyond agronomy!

Keep in mind, this information is based on the development stage of the plants and can vary within each category.

There are many types of grass residues that we observe breaking down in cash crops and cover crops. Corn stalks, as an example, would be a very mature grass. As you can see in the photo below, corn stalks from the previous season are not all the way broken down the following spring. Corn stalks have a high carbon content (high C:N ratio) and take the longest to break down relative to other types of residue. Circled in blue in the photo is the spring remnants of oats in the cover crop mix planted the previous fall. The oats would have been in a less mature stage (lower C:N ratio) when they winter killed so their breakdown has gone much quicker than the corn residue.

Another common grass that we think of with cover crops is cereal rye. Early in the spring, cereal rye would be a young, immature grass with low carbon and high nitrogen (low C:N ratio). When terminated in this early stage, cereal rye breaks down very quickly which acts like a starter fertilizer releasing nutrients it sequestered. Cereal rye that has been terminated later when it is more mature has been shown to cause nitrogen deficiencies in crops planted after. This is because the mature cereal rye has a higher C:N ratio which takes longer to break down. This ties up existing soil nitrogen as the soil biology works to break down the high carbon residue. 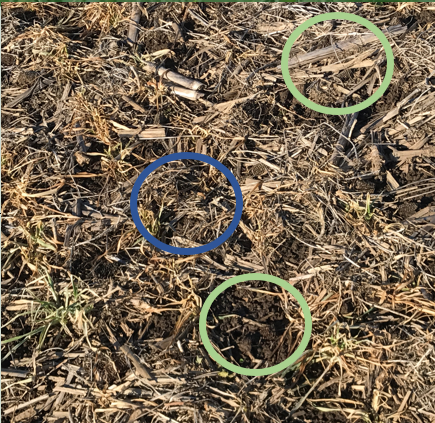 Brassicas like radishes, turnips, and rapeseed have the middle breakdown rate compared to legumes and grasses. As you can see in the photo above, the bottom green circle is where a radish was growing the previous fall. If you were to dig in that area, you could find some structural remnant of the tuber, but no top growth remains. Tubers take longer to break down compared to the very low C:N ratio of the above ground foliage. This is a benefit of the brassicas as a cover crop because over the winter the radish slowly breaks down to release nutrients brought up from deep and held in the taproot. The quick breakdown of brassicas is a large reason we do not often seed them alone as a cover crop and, instead, include them in a blend.

Legumes are low carbon and high nitrogen. This is what makes them have such high protein content, as the nitrogen is stored in the plant as protein. Even when legumes are mature, they tend to break down much quicker than the other categories mentioned, which is why legume residue cannot be seen in the photo above. There were legumes in this blend, but no residue is visible from the previous fall. This is another great example of why diverse blends are important. If you are wanting to control erosion or build soil, having more than just legumes in a blend is necessary.

Of course there is much more to the science of carbon to nitrogen ratios, but all of this shows what C:N ratios mean for your residue. How have you seen the breakdown rate of different species vary?